On the Power of Feminist Literature​

I have always been an obedient woman. I was well behaved and easygoing by nature, even in my adolescence. At school, I got along well with other kids by being a good student. As soon as I got married and became a wife and a mother, however, I learned that adolescence does not last forever. Practicing these new and varied identities of womanhood became a challenge, as I sought to implement in my own life what I learned about womanhood from the discussions I had in the literature classroom.

It was during my PhD when my advisor first introduced me to American women writers. I realized in my early 30s that it I loved reading the most these women writers the most. Though I knew that they wrote from another time and place, their texts introduced me to news ways of being and inhabiting womanhood. I soon decided to write my thesis on “good girls and bad girls in the American bildungsroman.” 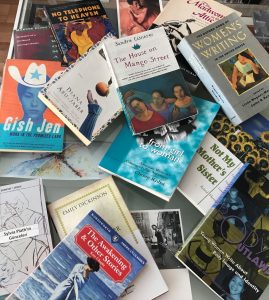 The more I studied, the more I understood how the characters in this genre construct their destinies through individual choices that run counter to prevailing social norms. It was precisely this aspect of womanly resistance that I liked the most. Then, when I first read the lines of Emily Dickinson’s poem “508 (I’m ceded—I’ve stopped being Theirs—),” I knew that I had found my heroine who embraced her identity as a way to work through her struggles with society.

As I grew older and became a professor, I continued to teach more and more women writers in my classes. This had an impact on the formation of my own self-identity as well. I designed courses on the bildungsroman, ethnic women writers, feminist politics, and gender studies. In my history of American literature course, to take just one example, my Turkish students and I studied poems by Emily Dickinson and Sylvia Platt alongside stories by Kate Chopin and Charlotte P. Gillman. In Turkey, we have Women’s Studies departments that offer courses on cultural studies and sociological approaches to feminism.

However, the violent suppression of women continues to be a very serious problem here, which is why I teach literary texts that show how women’s resistance can be a helpful starting point for raising students’ awareness. To help achieve that goal, my courses focus theoretical attention on the politics of corporeality, hierarchies between genders, underprivileged women writers, and multicultural feminisms. By studying these anti-essentialist theories alongside such ethnic women writers as Sandra Cisneros, Diana Abu-Jaber, and Maxine Hong Kingston, my students learn how there is no single form of expressive womanhood. Helping students of all genders understand how the proliferation of difference is indispensable to the flourishing of multiple and hybrid identity formations forms the backbone of most of my class discussions.

My pedagogy is also invested in teaching gender studies to male students. In societies like ours, where strict norms define manhood as much as womanhood and where patriarchy shapes everything from language to crimes against women. I think men can also learn much from the women writers I teach. Creating an awareness of gender’s social construction is socially and psychologically vital for both men and women. When students read and think deeply about these works, they become aware of the ways in which their gender roles shape, and are shaped by, their broader self-identifications. As Mexican-American writer Gloria Anzaldua says, “We don’t need labels, we don’t need others to name us.”

Since I live in a patriarchal, Islamic society with different customs and ways of life than the American women writers and theorists I teach, it’s important to me that my students are exposed to many different kinds of women’s experiences. I believe both men and women students need examples of empowerment, agency and self-creation. Although all the texts I teach were written by American authors, they all speak to a timeless universality of experience. By resisting the strictly-defined gender roles and identity-formations ascribed to them by their society, the women writers I teach reject traditional expressions of gender and become role models to Turkish students–– both men and women. In that sense, regardless of their gender, all students are able to express themselves and become inspired by these fearless writers.